The first article in our CSI Facebook Takeover week is about Michael Young, the founder of our School, recounted below by Marjorie Brans, SSE Managing Director for Canada.

As our name plainly suggests, the School for Social Entrepreneurs trains social entrepreneurs. Operating from 20 locations around the world, we’ve been working in Canada since 2012. But really our story begins 100 years ago with the greatest serial social entrepreneur you’ve never heard of, a chap named Michael Young.

Michael had a pretty ordinary name, but he led an extraordinary life as a one-man think tank, politician, author, academic celebrity, and founder of nearly 60 social enterprises.

Michael was born in 1915 to an artistic couple who found art more interesting than raising a child. They essentially abandoned Michael at Dartington School where he was to learn to be a fruit farmer.

Taking pity on the talented boy, the eccentric owners of Dartington, Dorothy and Leonard Elmhirst, informally adopted him. At this point, Michael’s life took a turn into the heady world of power and politics, for Dorothy Elmhirst was one of the richest, most prominent women in America.

Dorothy enjoyed a close relationship with social reformers Eleanor and Franklin D. Roosevelt. As such, Michael came to spend time at the White House where he could peer directly into a world where people didn’t just have great ideas—they did something with them.

Michael was famous for formulating crazy plans and immediately putting them into action. My favorite story is of him coming to the hospital for a heart condition and noticing that immigrants around him struggled to communicate with doctors. That’s when he hatched the idea for Language Line, an interpreting service that allows hospitals, police stations, and government agencies to pick up the telephone and speak immediately to a qualified interpreter.

Language Line massively increased access to public services and gradually became a huge commercial success. Today it offers translation services in 200 languages and conducts 70,000 requests daily around the world, including in Canada.

Michael’s pattern of social innovation (observing a need, crafting a simple solution, and taking action) played throughout his life. At the tender age of 29, Michael wrote the Labour Party manifesto of 1945 in which he successfully called for the creation of the National Health Service (NHS). If you’re proud to carry a Canadian health card in your wallet, thank Michael Young for helping pave the way.

As if a career in politics weren’t enough, Michael went on to become a distinguished sociologist famed for compassionately documenting the lives of people living in poverty and on the fringes of mainstream society. 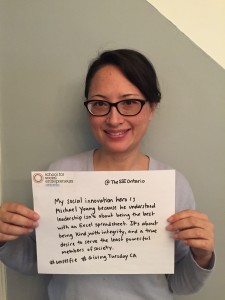 With his sociology expertise, Michael took insights into social problems to identify ingenious ways to create a kinder, more inclusive world. From establishing the Open University (open to anyone of any academic level) to campaigning for an Ageless Society which eliminated all forms of ageism, Michael believed that everyone had a gift to share with the world, and it was society’s duty to help each person discover and use it.

For his lifetime achievements, Michael was made “Lord Young of Dartington” in 1978, and was named by the BBC as one of the people who have had the greatest impact on Britain alongside Princess Diana, John Lennon, and Alfred Hitchcock.

We’re proud to call this supernova of social innovators our founder, and can’t wait to tell you more about how we’re carrying on his legacy here in Canada.

Tell us: who is your social innovation hero and why? Post your answers on the CSI Facebook page or send us an email at info@sseontario.org. Use ‪#‎Unselfie‬‪#‎GivingTuesdayCA‬ @TheSSEOntario. We’ll collect your answers for GivingTuesday on Dec. 1.