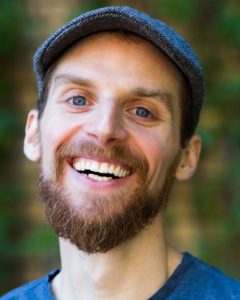 SSE Ontario is a school that operates on a “need blind” basis, which means we admit students regardless of financial background and ability to contribute to program costs. Tax-deductible charitable gifts ensure that promising social entrepreneurs from any walk of life can access the learning programs at SSE.

Donors who sustain the School with monthly gifts are known as “Give Every Month” (GEM) donors. SSE Ontario counts on monthly donations to be able to plan ahead effectively, knowing that we will have the funds to invest long-term in our students. As such, “GEMS” are particularly valuable  in our community.

In this piece, we interviewed Matthieu Bister about his decision to become SSE Ontario’s first ever GEM donor a few years ago. A leader in the Canadian changemaking community, Matthieu is an organizational development consultant and a graduate student in the field of Human Systems Intervention.

SSE: Matthieu, you’ve been a GEM for several years now. Can you tell us how you first heard about SSE?

Matthieu: When I first heard about SSE, I was working in the Pivot Program for intrapreneurs at Engineers without Borders (EWB) [editor’s note: EWB is a long-standing friend to SSE Ontario]. The head of EWB’s Kumvana program for African leaders mentioned that SSE and EWB had many values and interests in common. I contacted SSE and a professional friendship developed from there.

While I was at Pivot, SSE and EWB also contributed to the launch of the League of Intrapreneurs in Canada.

SSE: Given that you’re involved in so many worthwhile social change initiatives, what motivated you to give to SSE when you could support other great causes financially?

Matthieu: For me, there were two factors.

First, I love the work that SSE does. For instance, I love that you have launched a program to serve rural areas of Ontario. Everything you do is amazing! I see that you are trying new things, not necessarily trying to be cool, but doing the things you believe in.

When I met you all in 2013, you were working to serve people whose talent was overlooked. You strive for a tremendous diversity of participants, accepting everyone–from a marginalized youth to an older professional man looking for a new career.

SSE is very intentional in its diversity, and invests in people as they are. Students go on to contribute to their local environment. I saw this clearly after attending graduation of the second Social Entrepreneur Fellowship where I saw the richness of the diversity of SSE. That’s the moment I decided to become a monthly donor.

The second reason I decided to give monthly came out of my experience working in the not-for-profit sector where I had seen organizations go through difficult financial times.  Monthly donors help non-profits operate more efficiently because they offer more certainty of cash flow. I was very aware of this, so when I saw the call for donations, I connected my admiration for the cause of SSE and its work, and I started giving monthly.

SSE is very intentional in its diversity, and invests in people as they are. Students go on to contribute to their local environment. I saw this clearly after attending graduation of the second Social Entrepreneur Fellowship where I saw the richness of the diversity of SSE. That’s the moment I decided to become a monthly donor.

SSE: What has sustained your decision to keep contributing over time?

Matthieu: I’m now a graduate student and my finances are tighter, but I figure nobody ever went broke by giving to other people. Giving to SSE is my way of adding my stone to the building and my brick to the wall.

SSE: Thank you, Matthieu. You’ve demonstrated great leadership in your donations and we’re so grateful!

Matthieu: Thank you. I really believe in what you do!

To become a GEM donor or to make a gift to SSE Ontario, please click here.